DST sanctions Rs. 170 crores to IIT Delhi to set up Technology Innovation Hub for research in the area of Collaborative Robotics (Cobotics) 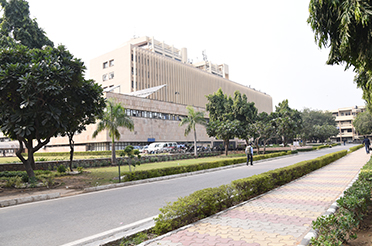 The Department of Science of Technology (DST), Government of India, has sanctioned Rs. 170 crores to IIT Delhi under the National Mission on Interdisciplinary Cyber Physical Systems (NM-ICPS) to set up a Technology Innovation Hub on Cobotics.

The Technology Innovation Hub on Cobotics at IIT Delhi known as ‘I-Hub Foundation for Cobotics (IHFC)’ has been incorporated as a Section-8 company by the institute in June 2020 with the initial seed funding from the DST.

Prof. V. Ramgopal Rao, Director, IIT Delhi who chairs the board of the company under the NM-ICPS programme of DST said, “The I-Hub Foundation for Cobotics (IHFC) will not only perform research in the area of Collaborative Robotics i.e. Cobotics, but also proactively translate the outcomes into products for the benefit of the humanity.”

The four verticals that will be covered under the IHFC at IIT Delhi are medical robotics, agriculture and disaster management, defense, and smart manufacturing (Industry 4.0).

The focus will be the technologies where robots should be able to work together with humans for maximising the benefit of human intelligence with robots’ precision and ability to work tirelessly in an environment where the humans cannot work.

More than 50 faculty at IIT Delhi and similar numbers from other universities in India and abroad including Japan, Korea, USA, UK and others, along with several companies, have already committed to the “I-Hub Foundation for Cobotics” at IIT Delhi.

One of the Board Members of the IHFC at IIT Delhi, Prof. S.K. Saha, enthusiastically shares, “We have already initiated two robotic applications with three companies to fulfil requirements of AIIMS New Delhi and PGI Chandigarh with respect COVID-19. Besides, a seed grant of more than Rs. 02 Cr have already been allocated to faculty for hiring Ph.D students and initiate research for the IHFC. We have also advertised for the post of CEO, IHFC.”

The 21st century has been an age of unprecedented advancement in sensing, computing, algorithm research and development. These advances have indirectly ushered a growth in robotics research and its adaptation in the real world. More robots are being used right now in the world than ever and with the COVID-19 crisis acting as a catalyst, this trend is only going to grow.