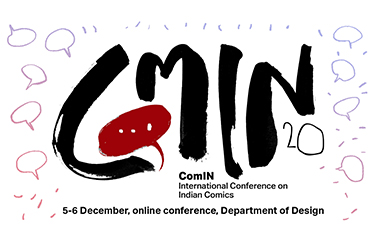 ComIN stands for ​Comics in India​. As the name suggests, the discussions under this will be largely surrounded by primarily two themes: Comics+India. The need for such a space has been felt for a long time. A space that provides the scope of dialogues to researchers, practitioners, publishers, and fans of the medium. International Conference on Indian Comics tries to bring that space.The tradition of comics reading is nothing sort of new in India. The mythic figures, the kings with demons, flying superheroes in the local cities, the black and white detectives, and so many other characters have touched upon an Indian kid's life at some point in time. With the popularity of technology-driven entertainment, Indian comics have seen a transition in form and content.

​The advent of technology can also be seen as a ground of opportunities for new stories, formats, and media. India has a rich legacy of graphic arts, visual narratives, and storytelling. Subsequently, contemporary formats of comics are also gradually evolving. The new-age Indian reader has different expectations from the media they consume. They are better aware of cheap tricks and faulty storylines. They are the tech-savvy, hashtag marching, black mirror generation who speaks loud. And speak sense certainly. With such an audience, where does Indian comics stand now? Are we producing stories that can bring moments of silence or peace in troubled times? Are we doing enough to lead Indian comics across the Globe? What is the perception of Indian comics in general? Are we missing something? With these prominent questions, we initiate a conference dedicated to the medium and its understanding in the context of India. Hence, the theme of the first edition of ComIN is REFOCUSING INDIAN COMICS.