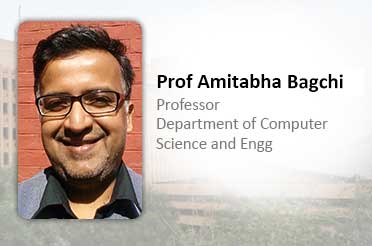 Amitabha Bagchi’s childhood was like the protagonist of his debut novel –sensitive, confused but overlapped with shades of ingenuity.

The ‘IIT fever’ gripped him late when he was studying in plus two in DPS RK Puram in Delhi.

“It was more of a peer influence. There was no parental pressure as they were confident of my academic prowess. I did take coaching for the JEE exam but that was more like fun outings interlaced with some academic stimulations that were not present in the school classrooms,” he said.

And in 1992, Bagchi cleared the JEE exam and got a ‘berth’ in the computer science department.

So how was it being in the midst of a pool of talents?

“Initially I was very excited because this was for the first time that I stayed away from home. I loved my new found independence and freedom. But gradually, the pressure of keeping pace with academics started percolating. In my first semester, I started playing carrom, and got hooked to it. This took a toll on my grades initially but I could make up on it later.”

Bagchi concedes that there were some initial academic setbacks but gradually he could overcome them. The young boy was, however, clear about one thing—to become a teacher at IIT Delhi.

“There were some options like MBA, industry or even joining the civil service. But I knew that teaching was something that was in sync with my temperament. “

And what were some of the life lessons that he learnt at IIT Delhi?

“I learnt the importance of balance. I realised that academic excellence was important but one has to move beyond the realms of academics. I took up many extra-curricular activities, even dabbled a bit in theatre. I learnt how to accept failures, stood for elections –lost but contested again.”

But what really enamoured me, he said was the style of teaching of some of the professors. “They were my role models and I always wanted to emulate them. They helped me approach a problem with an open, independent mind frame.”

Reminiscing his student days Bagchi says there were some stressful moments.

“There was an exam after every five weeks. But what really was an eye opener for me was the harmonious living of the diverse student population. Students from different linguistic, economic and cultural backgrounds shared such a beautiful symbiotic relation.”

Bagchi moved on to do a PhD in algorithm from the John Hopkins University in the US toed by two post-doctoral, again from the US.

But his dream of teaching at IIT Delhi remained alive even after getting a flavour of some of the top-notch international institutions.

He grabbed the first opportunity that came his way and joined IIT Delhi as a faculty in 2005.

So how was the home coming?

“Well, the initial paper work was hamstrung with bureaucratic loopholes. But as this waned I knew I had made the right decision. When one learns as a student, it is at a particular level but when one teaches it is at a new level. Teaching pushes us to a deeper level of understanding.”

Lastly how did he get into writing a book?

“I always wanted to write a fiction since my childhood days. My maiden book Above Average has reflections of my student days in IIT. Writing is therapeutic and I try to squeeze out time for this between the semesters.”