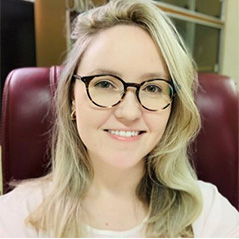 As a child Lucinda always looked for an opportunity to learn something new. It was while completing her secondary schooling in Dublin, that she gravitated towards science.

She went to Dublin City University to do her undergraduation in Biotechnology.

“This was a beautiful mixture of biology and engineering. It was in the final year, while working with Prof Enrico Marsili, that I came across the topic of electromicrobiology that entails production of electricity from bacteria under certain conditions,” she says.

Gradually she developed a keen interest in the topic and went on to pursue a PhD under Prof Enrico and Prof. Stefan Wuertz from Nanyang Technological University in Singapore.

“ During my doctoral research, I was endeavouring to find new bacteria that could produce electricity. We were even successful in isolating two such bacteria,” she said. “This field has always fascinated me because it has great potential for application in terms of energy recovery and biosensors, and also provides fundamental insight into the extremes of microbial respiration. These specialised bacteria can become electroactive when they don’t have access to soluble electron acceptors, such as oxygen, and instead must reduce things like solid metal oxides available in their vicinity in order to survive.”

Her post doctoral research, again in the area of electromicrobiology, focussed on observing the growth of bacteria under deep sea pressure to understand how electroactive they were in such an environment.

And why did she decide to work in India? “ Singapore has a large Indian population. I have many Indian friends and had even visited the country a few times. The transition has been easy and smooth. The working environment in IIT Delhi is very stimulating and I am learning new things. Everyone has been incredibly welcoming and my department has been very supportive .”

Currently Lucinda is focussing on setting up a lab that would conduct research on new bacteria for electricity generation. She is also taking a course in Microbial Biochemistry.

She is a regular Yoga practitioner and also takes out time to meditate.