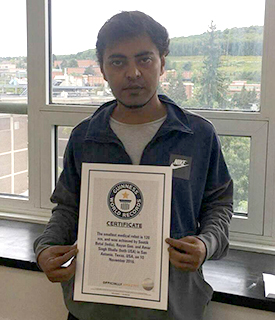 The tiny robot that holds hope for cancer treatment

Soutik Betal did his Phd in Electrical Engineering from the University of Texas at San Antonio. After working as a Research Scientist in Prague, he has recently joined as a faculty in IIT Delhi. Betal’s research interests are nanorobotics, electromagnetic medical devices and implants, nanofabrications and electronic devices and sensors. In 2018 he was felicitated with the Guinness World Record for designing the world’s smallest medical robot.

In an interview with the Communication Cell of IIT Delhi, he talks about his research journey that led to the designing of the world’s smallest robot, the challenges and the future plans.

How and when did you get the idea for the robot. Why did you decide to work on this?

I started working on my Phd research in 2013 at University of Texas-San Antonio under the guidance of Dr Ruyan Guo and Dr Amar Bhalla. I did extensive research on chemotherapy for treating cancer patients and realised that the side effects of chemotherapy were painful and sometimes even fatal. I decided to dig out ways to erase the side effects and this is how my journey started. After a broad-based research on this subject, I realized that Nanorobotics was the only solution for a targeted treatment.

How can these robots help in treating cancer and Alzheimer?

The nanorobots are 120 nanometers and 1/1000th the thickness of a strand of human hair. They can sense the difference between the healthy cell and cancer cells and provide a more targeted form of cancer treatment by remotely controlled cell specific electroporation and targeted drug delivery.

For Alzheimers, the problem is mostly caused by neurons that die and lose their functionality, so they interrupt the entire passage of a signal in the brain

The treatment of Alzheimer and Parkinson can be possible through the neuronal path regeneration performed remotely by the Nanorobot's controlled cell transport mechanism through surgically unreachable nerves.

What were the main challenges that you encountered while developing the robot?

The research itself was a revolutionary breakthrough and everything including fabrication and equipment assembly requirement was dotted with challenges. These techniques are now used by various labs throughout the world citing our innovation, patents and published papers. Our research led to the invention of world’s smallest medical robot that also fetched us the Guinness World Record award. The robot is so small that one needs to divide the tip of human hair a thousand times for getting the requisite size.

What next? Where are these robots currently being used?

The Nanorobots are currently being tested on mammalian subjects after passing the in-vitro testing. Finally they have to be tested on human subjects before they can be transported to the field.

Kindly explain the science behind the research.

We have developed nanocomposite particles that can be remotely controlled by an electromagnetic field. They function like extremely tiny robots that interact with biological cells. In a nutshell—the core-shell magnetoelectric nanorobot is a remotely controlled probe for targeted cell manipulation. We developed a remotely controlled dynamic process of manipulating targeted biological live cells using fabricated core-shell nanocomposites, which consists of single crystalline ferromagnetic cores (CoFe2O4) coated with crystalline ferroelectric thin film shells (BaTiO3). We demonstrate them as a unique family of inorganic magnetoelectric nanorobots (MENRs), controlled remotely by applied AC or DC magnetic fields to perform cell targeting, permeation, and transport. Under modulated AC magnetic field excitation, the MENR acts as a localized electric periodic pulse generator and can permeate a series of misaligned cells, while aligning them to an equipotential mono-array by inducing inter-cellular signaling. Under another modulated a.c. magnetic field excitation, MENRs can be dynamically driven to a targeted cell, avoiding untargeted cells in the path, irrespective of cell density. Modulated D.C. magnetic field excitation causes the MENRs to act as thrust generator and exerts motion in a group of cells.